Good morning everyone –  I know many of us were affected by the devastating Boston Marathon attacks.

As I said in my last post, my best friend Sarah ran in the Marathon on Monday and I am thankful to report that she is safe along with other friends of mine who were there. Her heat took off at 10:20am & we were able to track her run online. As I sat at my computer early yesterday morning, I couldn’t help but think about all of Sarah’s amazing accomplishments throughout the years with running, especially having surgery years ago where Doctor’s told her she’d never run again. Sarah has been through numerous medical issues since then but has always pushed through with hopes of being able to cross the Boston Marathon finish line.

I’ve posted about Sarah before in this #MirrorlessMonday post. I have always been so proud of Sarah for being true to herself & being a strong runner!  I’ve been her supportive friend at both marathons in the past 2 years which have lead her to Boston.

I’ve met her at mile 10 with an iced coffee during her marathon last year.

Cheered & watched her cross the finish line to qualify for Boston.

& met her at the end of the race with a fresh baked powercake & cookie butter.

After watching Sarah’s race online for a while yesterday, the boyfriend & I headed to the gym. On the walk over I got a text from Sarah that said…

“Love you!!! finished 3:28:03. Re-qualified for Boston 2014!!!!” I was thrilled for her! Not even 30 minutes later I was in the middle of a set & Corey yelled over for me to look at the TV in the gym. The caption read “Explosion at Boston Marathon.” I did a double-take and was so confused…I had just heard from Sarah? I rushed to my phone to have a flood of texts of worried friends & family asking if she was ok. I, myself, even started to question her safety after seeing the images on TV. I texted her (knowing if the explosion did happen, things were probably quite hectic) and I asked to please tell me she was ok. She replied, “Safe! We can’t make phone calls.” I then saw her post to facebook that she was safe in her hotel with her mom on lockdown & I proceeded to share that with my facebook friends so people could see.

Within 1 hour, the shift of feelings from being so happy for her to being sick to my stomach until I got a reply to my text was something I won’t forget. I am so grateful that she & her mom are now home safe & I wish that could be said for everyone involved in this horrible act. My thoughts & prayers are with anyone who witnessed this or was a victim.

With this post, I just wanted to let you all know that Sarah is safe. Thank you for those who reached out yesterday asking about her well-being. It’s amazing how supportive this community is. I saw this post yesterday which summed up how I feel… 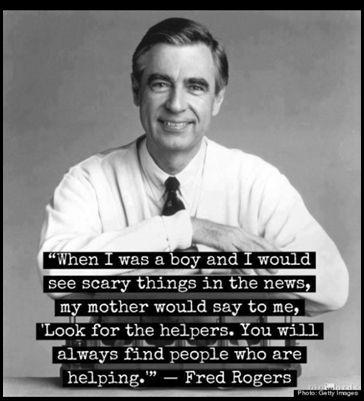 Ever since I can remember, I have no been a fan of the news. I like good news & would always fear the bad news stories growing up. I personally choose not to watch the coverage over & over again just so I can try to move on & keep praying. As Fred Rogers would say, there were a lot of helpers yesterday that stepped up to action and did the best they could. I truly hope & pray for a safer world full of more love and I am praying for those who lost their lives, were injured, or knew someone who was a victim.

Be True To You,