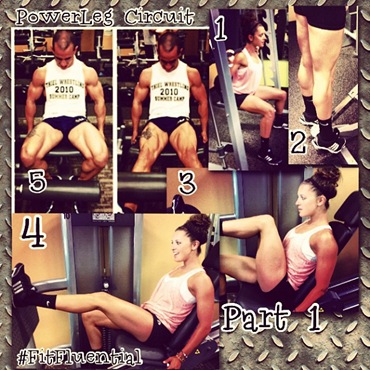 Part 1 of our POWERLEG CIRCUIT!
1) We did squats on the smith machine;
we put our heels really far out and with every rep pushed through the heels as much as possible!
This really targets your hamstrings! We did 20 reps with light weight.

Then we went straight into 2) Calf Raises on an elevation to really target the calves.
Every time we pressed up; we held that contraction at the top of the movement! Nice & slow! We did 20 of these.

Round 2; 3) One Legged Extensions; again, place your heel up high on the foot platform
4) Really push through your heels and target your hamstrings!
We did light weight and about 12-15 reps on each leg for 4 sets.

Next was 5) Seated leg extension – we did a drop set until failure! Talk about a way to get your HR up during the middle of the workout!
Start as heavy as you can go with being able to do at least 4 reps.
I started with 110. Do as many as you can and then drop down to the next weight.

Repeat this until you’re at the last plate (usually 10lbs) and rep out as many as possible!
I lost count but I believe I pushed at least 85 reps at the end!

Talk about feelin’ the burn!
Probably also helps when you have someone cheering you on the whole time!

Now not only have I been loving the new workouts;
but I’ve been obsessed with my (mostly) RAW POWERBOWL SALADS! 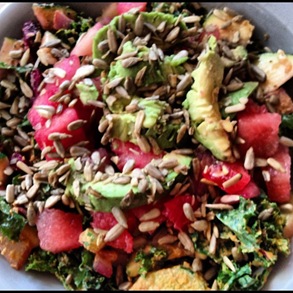 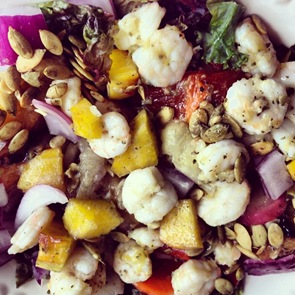 annddddd yesterday I started off my rest day with some
GREEN EGGS & YAM POWERCAKES
then for lunch I obvi had a
#powerbowl of kale, gold beets, red onion, citrus infused shrimp,
roasted plantains (from whole foods market), capers, & pepitas!

Obsessed with these shrimpies.

Let sit covered in the fridge for at least 2 hours
so the flavors really go into the shrimp!
The Citrus will also “cook” the shrimp.

We served this on a bed of raw veggies
or raw zucchini noodles – which I’ve been loving lately!

If you haven’t noticed, I’ve been incorporating A LOT of raw veggies into my diet
& I’ve really been loving how I’m feeling!

It’s great to get as many nutrients as possible.

This spark came from some of my reads while I was at the beach;
because who doesn’t love a good book while you’re relaxing on the beach?

Basically I read a bunch of books on raw foods the benefits of them.

I’m not going 100% raw but I am trying to incorporate more raw foods
& I’ve also toned down my meat consumption because I was feeling a little inflamed
lately and I thought maybe that could be the reason; so I’m listening to my body & trying it out!

hint hint, keep an eye out for a NEW CHALLENGE in
September where I will be partnering up with my veggie girl Heather!!

Do you have a favorite RAW FOOD
or favorite leg exercise?!