Hi everyone! I hope you’re having a great start to your week. I wanted to say a big THANK YOU to all of our Veterans out there for their service & those who are currently serving. Both of my Grandpa’s have served & I know many others who have done the same. It is truly an honorable decision to make & something that I admire. 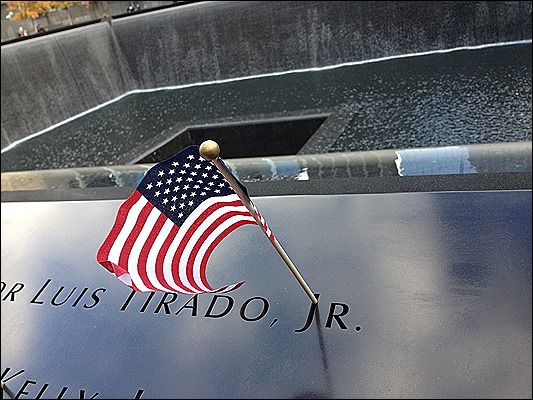 As I woke up this morning after getting back from an amazing weekend at NYC, I couldn’t think of a better day to share about our 9/11 tour that we took on Friday.

With all of the information I learned & stories I heard still fresh in my head, I will do my best to describe this experience. If you are ever in the area I highly suggest scheduling a private tour – it is something I will never forget. 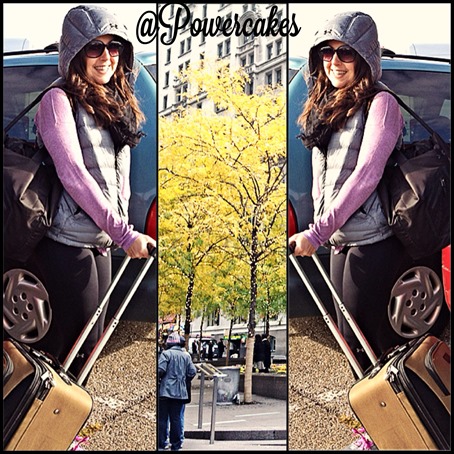 Friday morning was a chilly one (if you can’t tell by my UA puffy vest hood up look) & started out super early…we got up at 3am to get to our 6am flight only to find out that our flight was delayed about….6 hours. We headed to the airport around 930am and ended up getting onto an earlier flight! We had a 2pm tour scheduled at the 9/11 memorial so we were anxious to get into NYC. 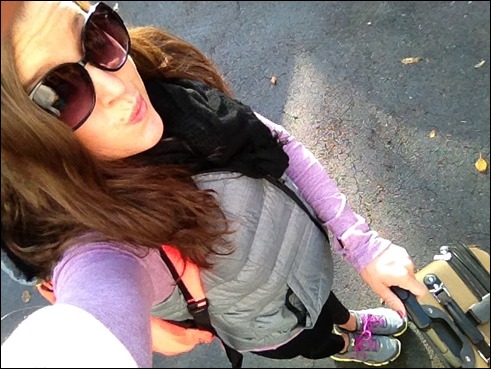 Sometimes you get a little bored while waiting for your mom in the driveway so a lip freckle selfie can pass the time. #sorrynotsorry – I have to say that I am totally getting the hang of this traveling thing. I honestly didn’t travel much leading up to this year, with the exception of a Rome trip in college, so I was ready ahead of schedule probably because I wasn’t really ever unpacked from my trip to South Carolina last week

I did do laundry though – no worries!

Anyhow- we got to NYC with just enough time to drop our luggage off at the hotel & head to the 9/11 memorial tour. 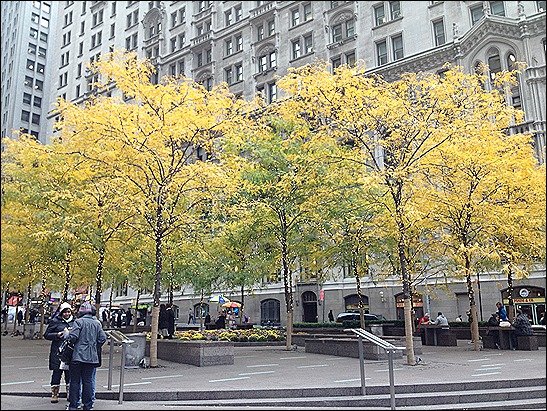 As we walked to the tour, seeing all of the tree’s lit up really started to put me into the fall/winter mood. There’s something exciting about lights on a tree, especially in New York City! 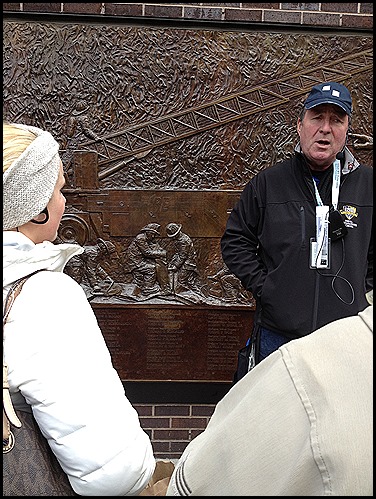 Our tour guide was AWESOME. (I know I use that word a lot, my bad, but it is perfect for him.) His sense of humor was great but he also really got deep into how 9/11 was for him. He was a Chief for the NYC Fire Department & was working the day of 9/11. You can only imagine the type of stories that he told to us. His passion for what he did (he is now retired) and still does for the community & fire department truly shows through his words & actions. 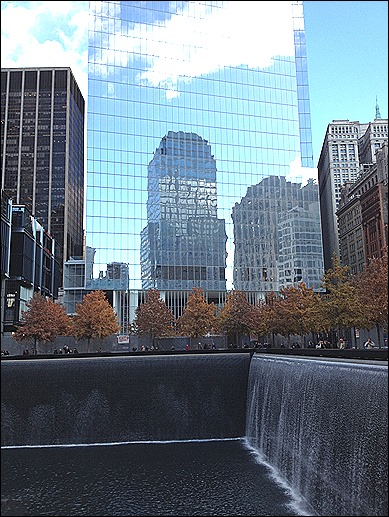 It was about an hour tour that took us around the 9/11 memorial with frequent stops for stories & facts. I was so into what he was saying that I forgot to write down some of them so I’m referring to the 9/11 memorial site to share with you.

The National September 11 Memorial, or 9/11 Memorial, opened on the 10th anniversary of 9/11 attacks in a dedication ceremony for victims’ families. Its public opening date was Sept. 12, 2011.

Here is a picture looking down onto the site from above so you can see where the towers once stood. 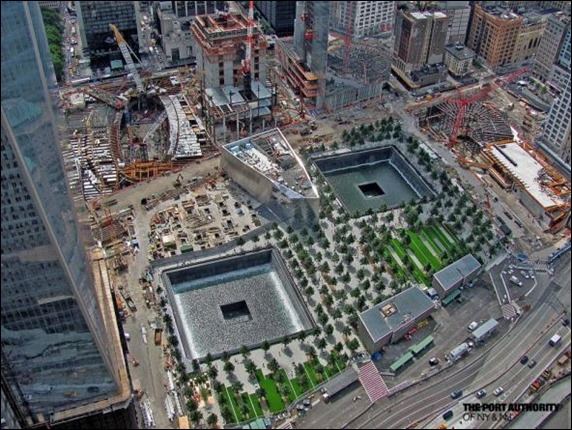 The Memorial’s twin reflecting pools are each nearly an acre in size and feature the largest manmade waterfalls in the North America. The pools sit within the footprints where the Twin Towers once stood. Architect Michael Arad and landscape architect Peter Walker created the Memorial design selected from a global design competition that included more than 5,200 entries from 63 nations. 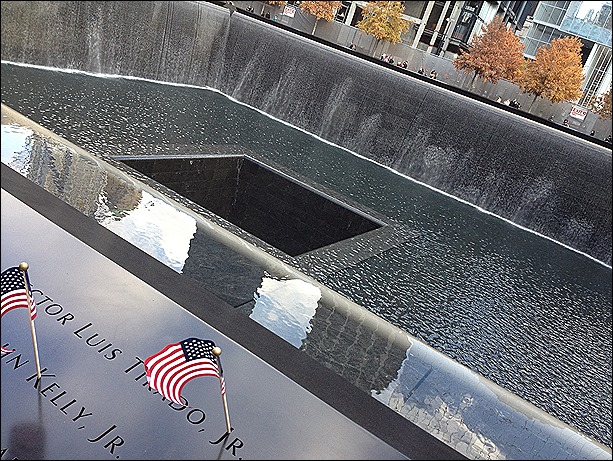 The names of every person who died in the 2001 and 1993 attacks are inscribed into bronze panels edging the Memorial pools, a powerful reminder of the largest loss of life resulting from a foreign attack on American soil and the greatest single loss of rescue personnel in American history. 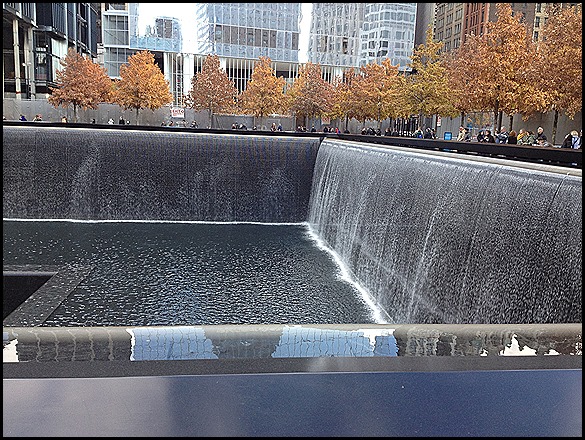 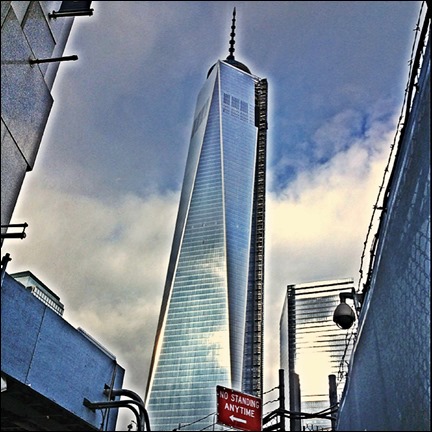 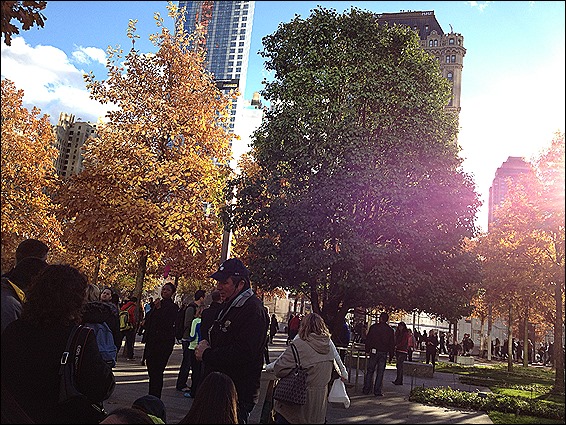 Here is a shot I took of our tour guide & the one green tree throughout the whole memorial. What we learned about this beautiful tree was that it was saved on 9/11  & became known as the Survivor Tree after sustaining extensive damage. How amazing that this tree lived through the 9/11 attacks at the World Trade Center. In October 2001, the tree with lifeless limbs, snapped roots and blackened trunk was discovered and freed from the wreckage  at the World Trade Center.

Year by year, with the tender care and attention of the nursery staff, the tree has grown to greater and greater  height, filling in with numerous branches and bountiful leaf cover.

The Survivor Tree, which was planted at the Memorial in December 2010, will continue to grow among hundreds of swamp white oak trees that have been planted on the Memorial Plaza since Aug. 28, 2010. When the Memorial is fully complete, more than 400 trees will line its plaza, which features a complex soil-supported paving surface and unique cistern system designed to sustain the urban forest.  [source]

Isn’t that amazing? It was so cool to see people walking over & taking pictures with the tree. In many ways it signifies how we can all be pushed down but it’s about getting back up again & continuing to move forward to make a better tomorrow.

This tour is something I will never forget & put a lot of things into perspective about how that daily truly changed us. Again, thank you to everyone who serves for this Country. The stories of some of the men & women that put their lives on the line that day, and every day, just to help others it so honorable.

After the tour, we were ready to warm up inside somewhere & grab a bite to eat. I had done some research on some local restaurants (which can be totally overwhelming in NYC since there are SO many to choose from!) and I came across The Blue Planet Pizza Bar located at 120 Greenwhich street. I originally thought they had gluten free pizza but I got it confused with another place – BUT the food did not disappoint! 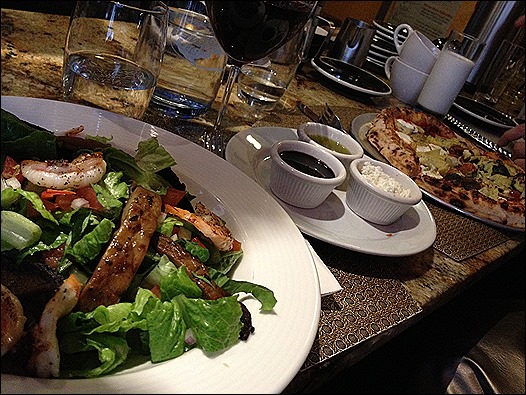 I ordered a salad with marinated portobello mushrooms, grilled shrimp, beets, & feta. Mamacakes got a pizza that they make right in front of you in a big brick oven. I tried hers out & it was great. (For those that don’t know, I don’t have a gluten allergy but I do have an intolerance so I can’t really “over-do” the gluten. Therefore, a little bit here & there doesn’t affect my stomach too much! And this pizza was definitely worth it.) We both got some red wine & hung at the bar to enjoy our meals. 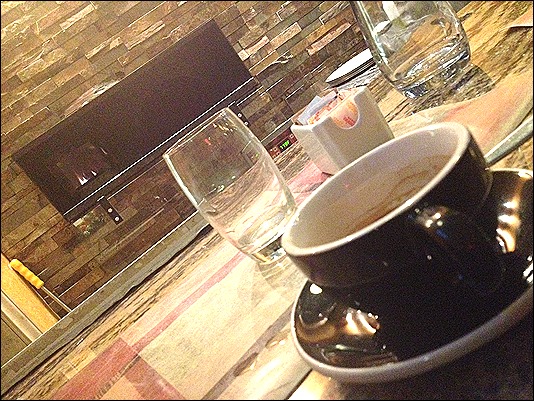 There happen to be a big party inside the restaurant so the only seats available were at the bar. The staff couldn’t have been any nicer & felt bad (which honestly it wasn’t a problem at all – we totally loved our seats) so they gave us complimentary drinks after our meal. I got an espresso and my mom & I stayed cozy by the brick oven as we watched them make pizzas. 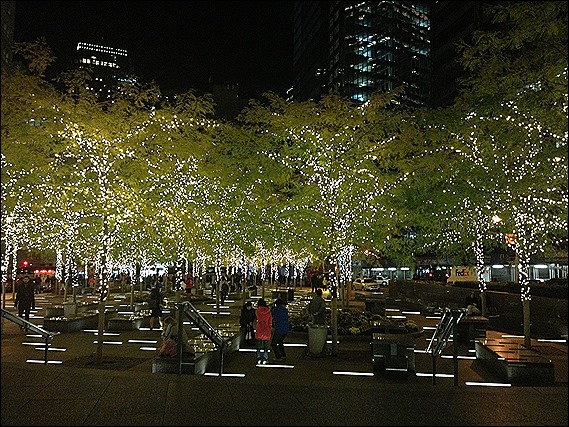 We decided to head back to our hotel, we were pretty tired & were excited to chill the rest of the night before the big day at Macy’s early the next morning! On our walk back, the trees we saw earlier in the day now shined even brighter in the darker hours of the night.

Closer to our hotel, we stopped by a place called Magic Mix Juicery  located at102 Fulton Street @ William Street in the Financial District.  They had some amazing juices, fresh salads, sides, smoothies, & desserts that looked too good to pass up! 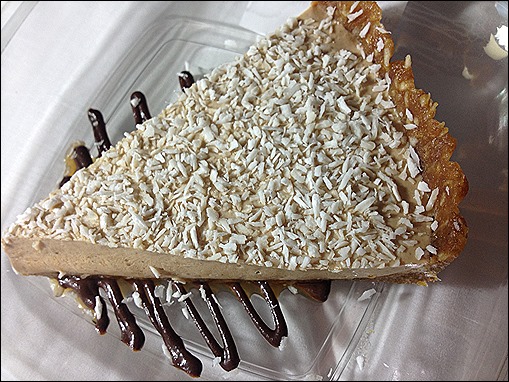 I got a piece of Coconut Kreme Pie which was made with cashews, fresh coconut kreme (we watched the one worker scooping out the meat of the coconut & pureeing it right before our eyes), vanilla maca, on a flax raw crust & took it back to the hotel to enjoy with a cup of tea before bed. Perfect way to end our first day in NYC.

If you do go to this place I HIGHLY suggest getting some homemade coconut milk! We sampled it along with a bunch of juices & it was all delish!

Tomorrow I will fill you all in on the What’s Beautiful Event at Macy’s in Times Square!

Have you ever visited NYC? I’d love to hear about it!