Hey all! Happy Saturday! Hope you guys had a great week.

Exactly one week ago a group of us all spent the day together as Team “Protect The Skin You’re In” for the Miles Against Melanoma 5k Run/Walk in Pittsburgh. What brought us all together? Well, one of my best friends Sarah has a wonderful Mother named Marcy. Marcy is a Melanoma Survivor & all of us teamed up to support Marcy & the other participants in the 5k. 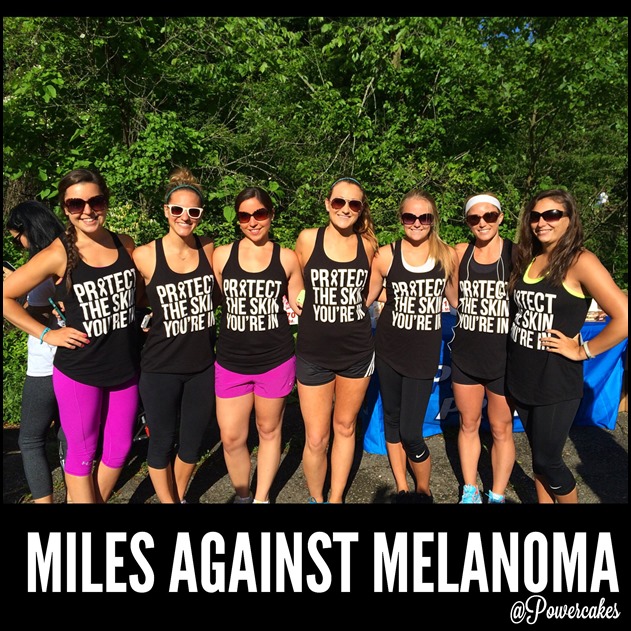 With today being the first day of summer (hiyo!), I thought it would be a great time to not only recap the race, but also bring awareness to Marcy’s story.

I took some time to learn more about the details of what Marcy truly went through & I also asked for her top 3 tips on how you can hopefully prevent this from happening to you or your loved ones.

It has truly become Marcy’s passion to help educate others on Melanoma since she has been through this first hand. Melanoma is the most dangerous form of skin cancer which cancerous growths develop when unrepaired DNA damage to skin cells (most often caused by ultraviolet radiation from sunshine or tanning beds) triggers mutations (genetic defects) that lead the skin cells to multiply rapidly and form malignant tumors. [source] 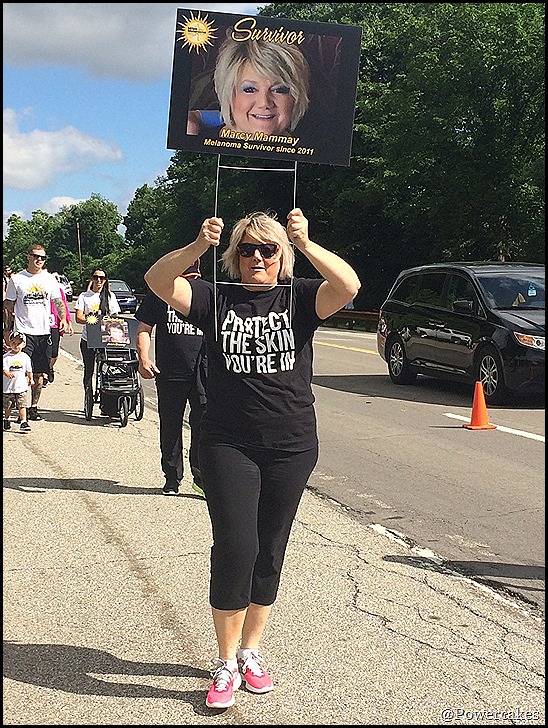 Let’s go back to January 3 years ago when Marcy started to become more and more aware of this constant itch that she had on her back that just wouldn’t go away. For about 4 months she didn’t think too much of it and just continued to apply some anti-itch cream until one day she noticed blood on the back of her shirt corresponding with the location of the itch.

With her son’s High School Graduation coming up & a 2 week Beach Vacation planned, she told her Husband that she would get it looked at after they got back. With Marcy’s history of using tanning beds since she was about 18 years old, she was advised by family & friends to make an appointment with a Dermatologist; which Marcy admits that she had never done before.

Marcy told me that back in the day of her using tanning beds, it was stated that they were better than natural sunlight. Not only did that reassure her that using the bed was her best choice, but she also admits that she became addicted to the feeling she got after she was with her session. She says it was like an “endorphin rush” that just makes you feel better about yourself & the vanity that a tan provides.

Now, years later, this past history of cycling between the tan to burn to peel factor, had increased her chances of having something that no one really imagines they could get one day; Melanoma. Going back a few words to the statement of “a tan to burn to peel factor”, Marcy explains that that cycle can truly increase your chances of developing skin cancer. If your skin burns & then peels – your chances can go up by 70%.

Unfortunately, these facts are all too known to Marcy as she heard the news from her Doctor that she had Stage 3B Melanoma the day of her son’s Graduation Ceremony, Stage 5 being the most severe. She recalls that day of just feeling horrible knowing that this was something she could have prevented if she was more aware of what her years of tanning booths were doing to her skin cells.

Here is an image that Marcy provided of her mole before it was removed: 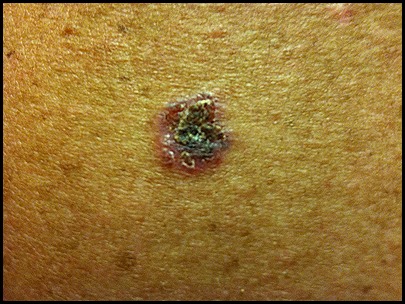 Here is an image of the scar that Marcy now has where the Melanoma once was: 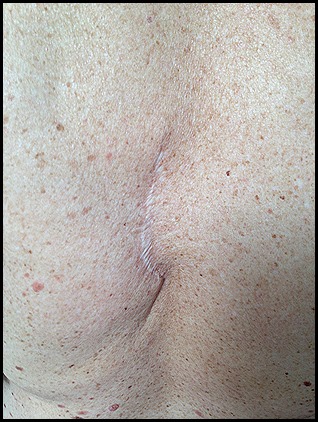 Fortunately for Marcy, the cancer did not spread to any lymph nodes & they had to remove about a 6inch by 3inch deep piece of flesh from her back. For others though, this isn’t always the case. Marcy told me that she keeps the image of her Mole in her wallet to not only refer to for herself, but to also help bring awareness to others that she may be in conversation with on this topic.

I personally have had 4 moles removed before and one of them I had to go back in for to get more skin removed for a second time. I can’t even begin to imagine how Marcy felt on the day of her diagnoses but I do know that she is taking strides forward to bring awareness to others on this topic & hopes that others will be inspired by her story to “Protect The Skin You’re In”.

Here are Marcy’s top 3 tips to Protect Your Skin: 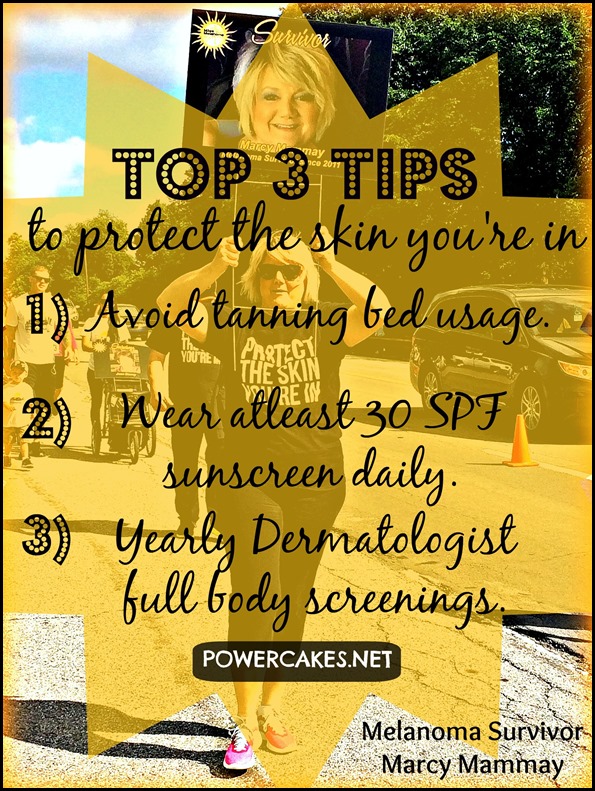 1) Avoid Tanning Beds: This is Marcy’s number 1 tip because she truly correlates her diagnosis to the years she spent going to a tanning bed. She is very passionate on this topic & that’s the reason why she made it her number 1 tip.

2) Wearing at least a 30 SPF sunscreen every day. This is something that I sometimes forget to do, but I do make sure that my face moisturizer has an SPF in it as well! After talking with Marcy, I really want to make it a goal to put on my sunscreen before leaving the house. Marcy also said that it’s important to look for sunscreens that have “Zinc” in them to help protect your skin & to always reapply if you’re outside, in the water, or running around as most of us probably forget to do so.

I looked on my favorite site, Iherb.com and came across this brand of SPF Sunscreen that is Organic, 30 SPF, & has zinc from the Badger Company. 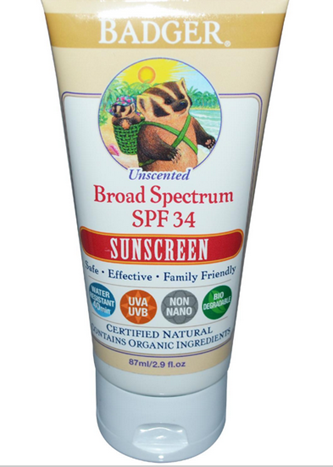 I also like that it’s unscented since my skin is a bit sensitive!

3) Making a yearly check up with your Dermatologist. Personally, I’ve been seeing a Dermatologist for years due to some other skin issues & a yearly mole screening was something I was used to. I truly believe in getting a check up every year as well as I’ve already had 4 moles removed. Marcy is very passionate about this too since her years of avoiding the Doctor may have led to her Melanoma reaching the Stage 3B phase.

All 3 of these tips are easy steps we can take towards our own skin health. Speaking with Marcy about this topic, you can tell how passionate she is to have other people be aware of this deadly disease that is becoming more & more common amongst us all. She said that when she’s in the doctor’s office with other Melanoma patients who are still in their teens, makes her even more driven to help spread awareness.

She truly says that just practicing smarter sun exposure can make a lot of difference all year round. 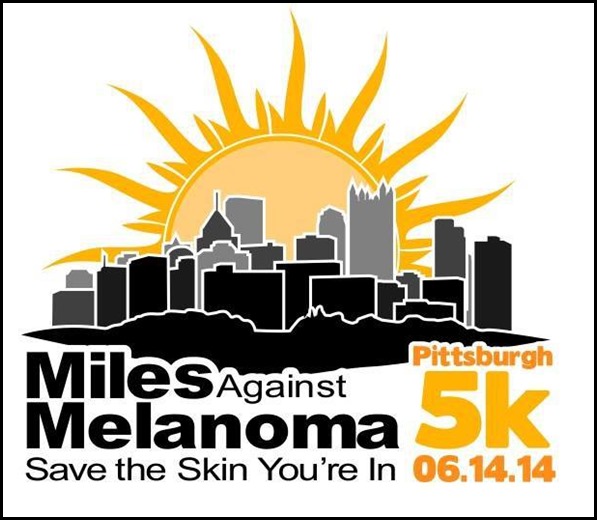 Another way that others are bringing education & awareness is by hosting the Miles Against Melanoma which is a national organization that began in 2010 that raises money to provide funding for awareness, education, advocacy and research for skin cancer, melanoma and cancers related to melanoma. Marcy & Sarah (her daughter and my bff) put together a team of 18 this June to participate in the Miles Against Melanoma 5k.  We drove in style…school bus style. 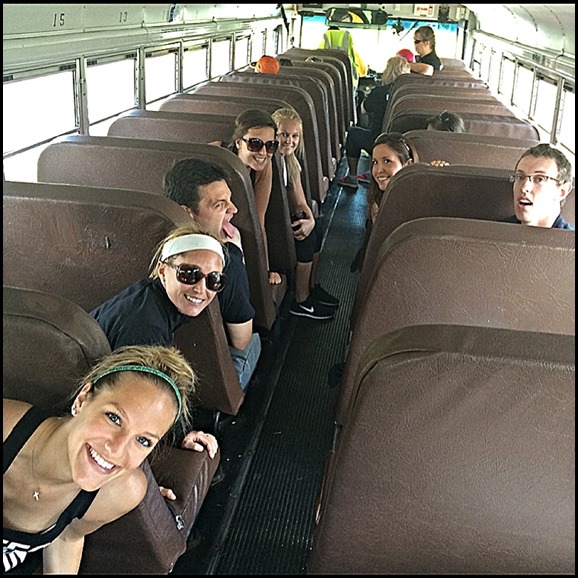 We have hopes to fill up the whole bus next year so if you’re around the area and interested in being on team “Protect The Skin You’re In” definitely let us know! 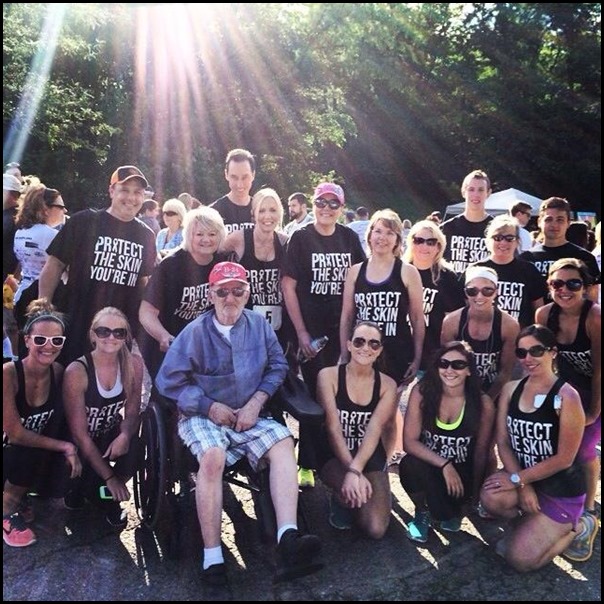 Here are some pictures from the day of 5k! 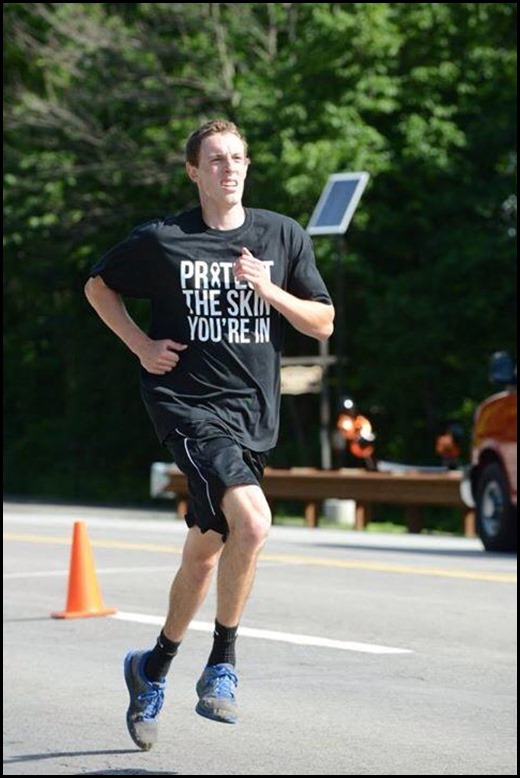 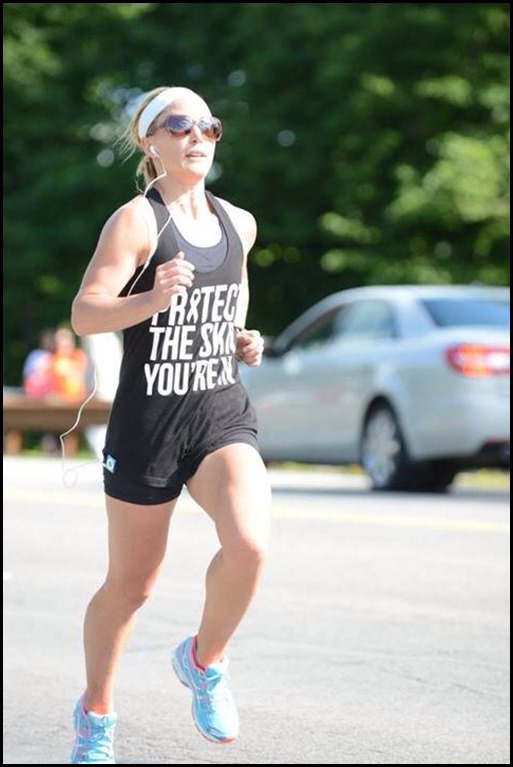 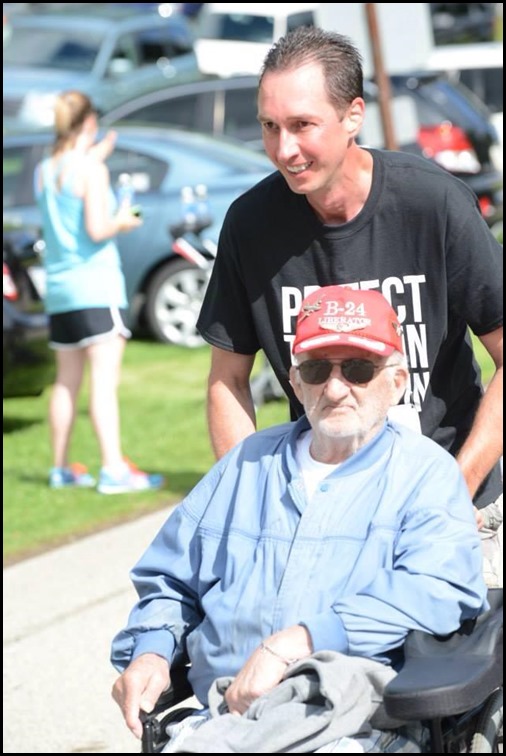 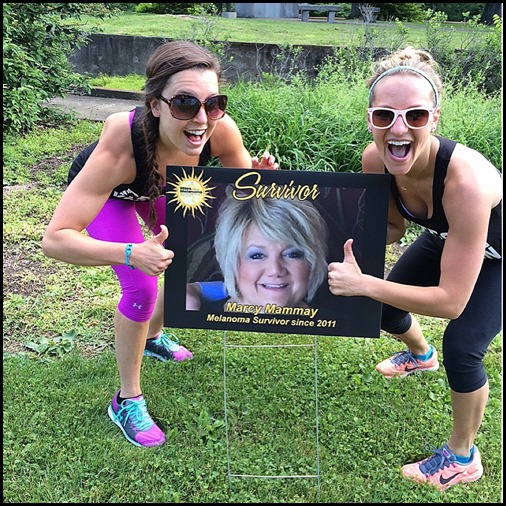 We found Marcy during the run & had to get a pic! Please disregard my misplaced scapula joining the party. 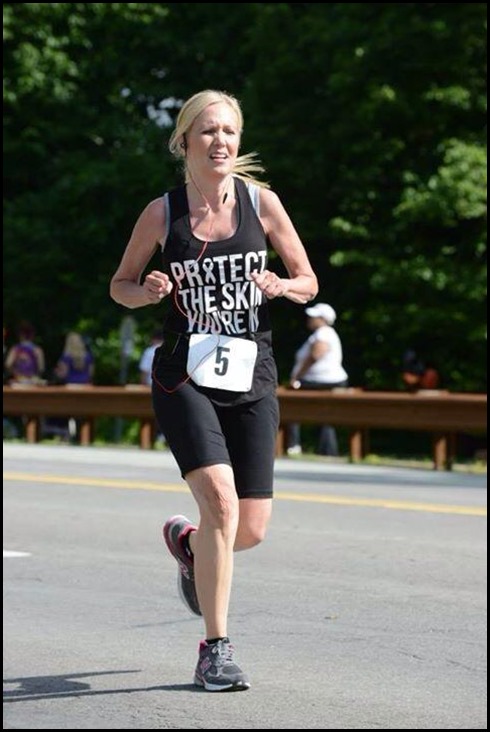 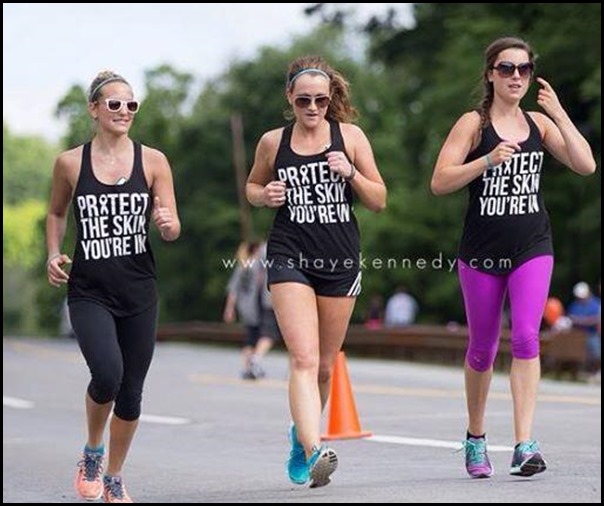 Not sure why I’m making pretend phone calls in every picture. 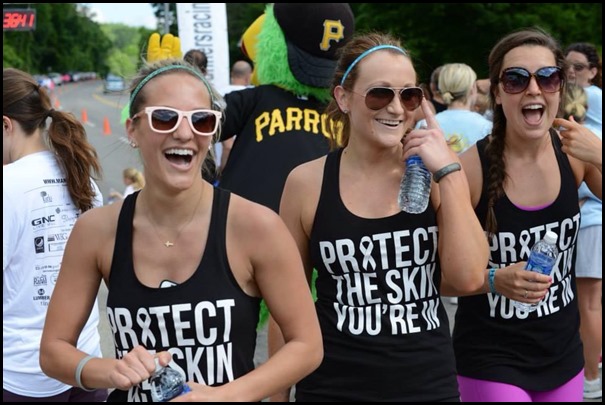 Miss Kati got top 3 overall for the women!  Representing team Protect The Skin You’re In! 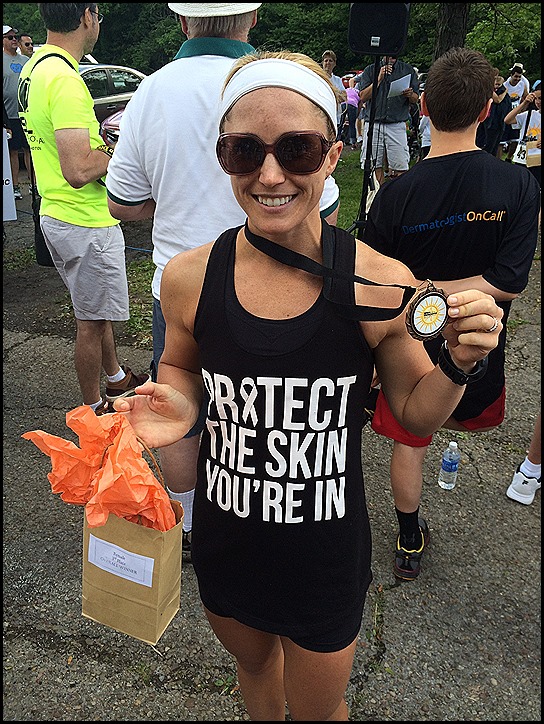 Marcy, we just ran a 5k, but first, let me take a selfie. 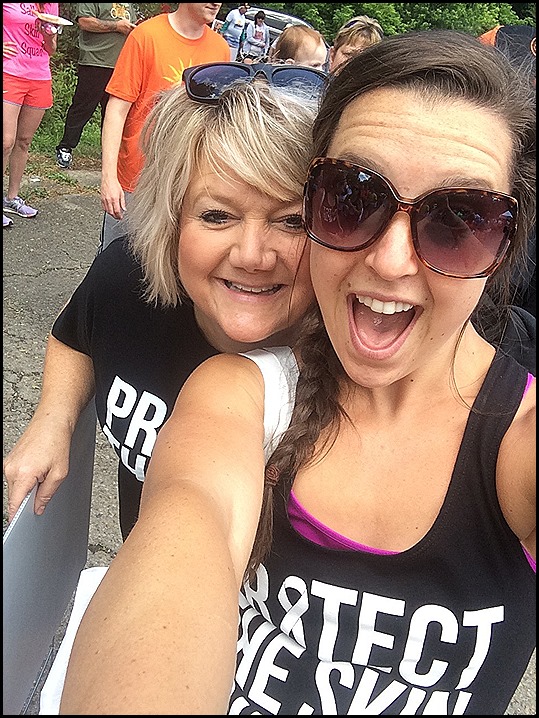 The whole day was full of inspiration & motivation from everyone involved. Hearing the stories of the runners, the families, & friends of the loved ones who have fought Melanoma or sadly lost their battle to it, really put a lot into perspective. I really want to thank Marcy for taking the time to answer my questions & help bring awareness to something that for many of us, may be something that hits home.

So this Summer, let’s keep Marcy’s top 3 tips in our minds so we can have safe & enjoyable time outdoors! 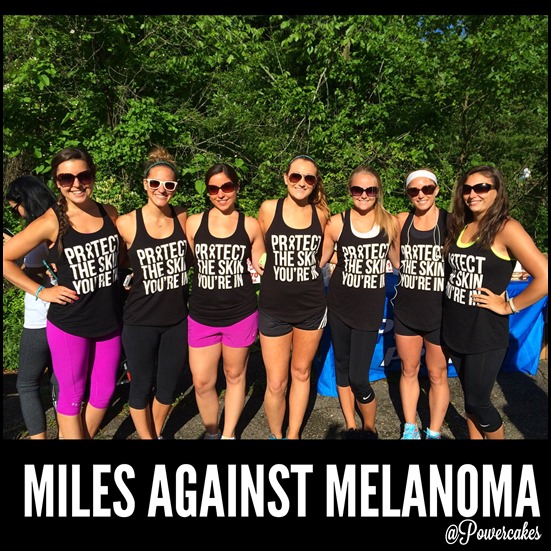 Have a great weekend all & thanks again to Marcy!

For those interested in the tank tops – we are working to get them available to you guys so keep an eye out! :]